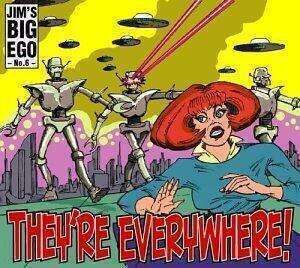 Well, it's the moment you've all been patiently waiting for...  Jim's Big Ego is proud to announce the release of their fourth studio CD:

Produced by JBE and Ducky Carlisle, the new disc features 12 delectable JBE tracks including "Lucky," "Mix Tape," "Better Than You" and of course, "They're Everywhere." On top of that, the CD features cover art sketched by legendary comic book artist (and Jim's uncle), Carmine Infantino.

Starting off, "They're Everywhere!" will only be available for sale at shows. The first place you can get it will be in Harvard Square at the Guerrilla Flash Mob Slash CD Release party: Saturday, September 13th at 8PM. As you may have read, our official cd release party was unilaterally cancelled by the House of Blues in the ninth hour kicking us literally out onto the street. However, we will not let this get us down! We will be out there with bells on somewhwere in Harvard Square. Grab some coffe at Peet's and look for us out there - come and celebrate!
There will be music all day in the spot we choose - from some of our friends who play outside. We will top the evening off at 8PM.
Whether or not you live near Harvard Square, you can now order the disc or download tracks directly from JBE by going here.