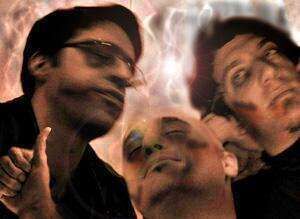 What makes the band's achievement all the more impressive is that their victory was claimed in the face of overwhelming evidence to the contrary. By all rights and measures, Satan has thoroughly trounced Jim's Big Ego and made the band his bee-atch.  The band has been raked over coals, dipped in oil, experienced multiple evisarations, and been given a nasty papercut--and those things can smart.  The Devil then pounded the band members' bodies into a pulpy play-doh like subtance and molded them into a pair of giant thong underwear which he then wore to a yoga class.  But being turned into clay and sweated onto Satan's scrotum didn't deter the plucky members of Jim's Big Ego!

"We faced the worst he had to give and still said 'bring it on, bad man!'" crowed lead singer/songwriter, Jim Infantino.  "The Devil stuck us inside every orifice of his body, but we still asked for more!"

"I wish Jim would've stopped asking for more," bassist Jesse Flack said, "but then again, that's what allowed us to win...I guess.  I'm really not sure I understand how we won."

Drummer Dan Cantor said "To tell you the truth, the whole thing was kinda bawdy for my tastes.  I thought we were just going to have to beat him at chess or something, but no, apparently I confused the Devil with the Grim Reaper.  Well so what, it's a simple mistake!  I certainly didn't deserve to be treated all that badly. It was just like--remember during the trash compactor scene when Luke got dragged under into that turdy, putrid water?  Well instead of that imagine that he had every bone of his body broken and then was stuffed inside the devil's ass!  Still, it's a good thing we won.  I bet he'll think twice before he's evil again."

While certain in their victory, Jim's Big Ego is reluctant to predict how the impending peace talks will play out.  "We'd really like to involve the UN in this one," Flack said.  "'Cause first of all, that whole thong deal was totally a violation of the Geneva Convention.  And secondly, please don't make me go back there--especially not with Jim.  He's crazy."

When reached for comment Lucifer Morningstar said "I don't understand it--I completely destroyed those guys.  I mean I ATE THEIR SOULS!  Their souls are here, right now, inside of me.  How can they call that a victory?  And what are you doing interviewing me for a press release anyway?  Get out of my office!"