JBE's first Tour of the NorthWest a smashing success 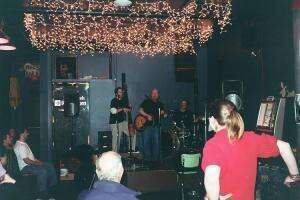 Well, our first NW tour was a big success. What a beautiful, friendly part of the country. Somehow, people out there know us, know our songs, and they came out and had a blast. Traveling with the Bose systems definitely saved us many times. As I told DanS at the end of the week, if we had traveled light and just depended on the house systems everywhere we went, a majority of these gigs would have ended in discouragement and frustration, as in "why did we come all the way out here just to sound like !@#$??" As it was, we got a lot of compliments on the sound, and every place we went they want us back again, with some venues offering more prominent shows on weekend nights, etc. We're already working on a return trip some day.

THE IRON RABBIT, OLYMPIA, WA
Our first gig of the tour. It had been described as "small." We figured that was the venue, but it turns out the stage itself was like half a postage stamp. And here we were with three Bose systems and a 26" kick drum. After much chin scratching, we managed to get all of us going through the 4 inputs on one system. Not our ideal setup by any means, but for a small room and a ridiculously tiny stage, it did the trick. Next time we'll find a bigger stage, and a smaller drum.

MARS BAR, SEATTLE, WA
We absolutely loved Seattle. See Dan's review of the show above. We gave the house guy line outs of everything - not because the room needed it, but because he needed to be appeased. The more he took out of the mains, the better it sounded. This whole "dealing with the house sound" thing can be tricky sometimes.

MISSISSPPI STUDIOS, PORTLAND, OR
Wow - what a nice place. It's like a really comfortable living room with a stage and seating for about 90 of your closest friends. Plus an exceedingly knowledgeable house manager/sound guy. This was a case of the house being jittery about us bringing the Bose system, but when they met us, talked to us, and heard the system, all worries went away. As an added bonus, they set us up with those Neumann 105 vocal mics that everyone around this forum has been raving about. Holy cow. Now I get it. The combination of the 105 and the L1 is really astonishing. I've never heard a purer, more natural vocal sound outside of a studio before. The night ended with cigars and Buster Keaton movies on the back deck.

SAM BOND'S GARAGE, EUGENE, OR
This was one of those dreaded "cave" stages, but it turned out not to be a problem. The sound was great. So great, in fact, that the night ended with one group of guys offering to pay us $100 for a t-shirt if we'd play 2 more songs, and the girl next to them offered to kick in a little (I swear I'm not making this up) "booty shaking" to sweeten the deal. Needles to say, we played an encore. Here's an indication of how easy the sound guy's job was that night: during our encore set, he competed in an eclair eating contest at the bar. He came in second. We packed up to chants of "One more! One more!" A fun night for all.

SIREN'S, PORT TOWNSEND, WA
This place was described as "worth the load-in." With two long flights of stairs, a long hallway, no elevator, and no parking, it would have to be a pretty damn cool spot for that to be true. It was. First of all, the drive out the Olympic peninsula was amazing - just outrageous scenery. Then the town itself is this funky little village by the water, and the venue has a great vibe, great food, and a great crowd. The Bose systems made a painful load-in tolerable, and it turned out we really needed them. The house system looked to be... um... lacking. (The entire monitoring system consisted of one of those tiny Hot Spot things on a stand.)