free as in music 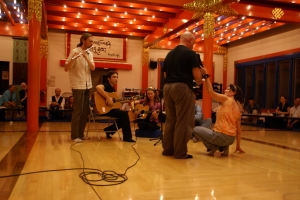 Free music is mostly a misnomer these days, relegated to summer concerts and the odd open-mike night at the local coffee shop.  But to some bands, free is an opportunity.

Jim's Big Ego, the tongue-in-cheek, clever, insightful brainchild of Jim Infantino, just released online its fifth album, free*.  Free* will be available in physical form in a few weeks, but for now you can download the full album for any range of money.  The more you spend, the higher quality download you get.

Jim is a Bostonian and (I hope he won't mind me outing him) a meditator.  He was my next-cushion neighbor on retreat this summer.  I had a sneak preview of some of these songs, as Jim pulled out a borrowed guitar a few evenings after everything else was finished.

The picture below is of Jim composing some napkin poetry during one of the retreat celebrations.  He is accompanied by some of the most talented musicians I know.  Eli Gordon, on flute, jumped in and improvised on just about anything the others played.  Alex Van Gils writes songs, plays guitar and piano (and probably other instruments), in multiple genres.  Impromptu music sessions also enjoyed the participation of many others, on piano, guitar, drums, singing, dancing, etc.

Jim professes that he doesn't write love songs.  Perhaps not in the standard sense, but this album is full of lines that poke at the most universal parts of our modern human experience.  He caricatures our most common neuroses, and so betrays the necessity of love.  Check it out, and go see him if you can!

read the full article: free as in music